Rising ocean temperatures have given rise to coral bleaching events at higher rates than have been seen in observed history. Researchers at the National Center for Atmospheric Research are studying how effectively coral reef ecosystems can repopulate each other after bleaching events through a metric called Potential Connectivity. In this visualization, we observe a state of the art flow simulation called CT-ROMS. This simulation replicates the nature of the Coral Triangle, recognized as the world center for marine biodiversity. 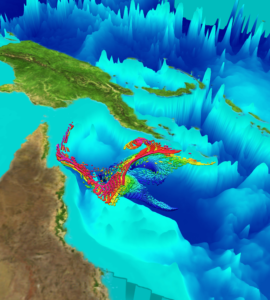